Turn A Wrist Grabbing Attacker into a Whimpering Idiot

An arm or wrist grab is an extremely common tactic used by street thugs to intimidate and gain control of their targets. Luckily, knowing a few tricks will allow you to take down even large attackers who attempt to attack or restrain you using this kind of grab. As a side note, an arm or wrist grab (which some people don’t perceive as a violent move) is often the first move that is followed up by something more violent. Bottom line, if someone grabs your arm or wrist you must act. 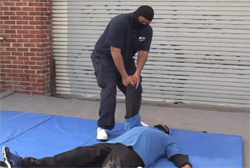 We’ve covered countless reasons why grabbing hold of an intended target is the dumbest thing an attacker can do in other articles and videos, and this move adds one more reason to that list. To top it off, this move is fairly simple, making it easy to commit to muscle memory. This means that you will be able to reflexively use it in the heat of the moment without locking up. Here’s the breakdown:

The technique in this lesson comes from Dr. V. Growing up on the south side of Chicago, Dr. V had to learn to fight at a young age just to survive. He’s also served in three branches of the military and until recently worked for the state department as a special agent providing protective duty for high profile VIPs. Dr. V hasn’t just practiced this move in a dojo (although he’s put in plenty of hours there too). No, Dr. V has used this exact self-defense technique on multiple occasions to take down attackers foolish enough to get in his way.