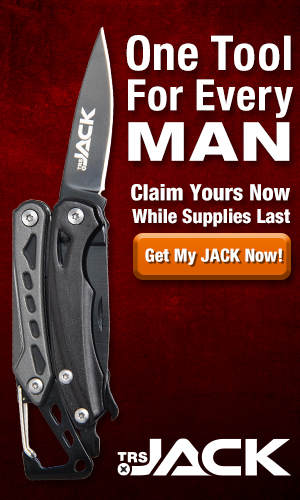 Jimbo here again on behalf of my business partner Bob Pierce and the rest of the crew. (Yep, they’re all behind me waving “hello” to you).

Hope you’re enjoying our newsletter. As long as you’re a
‘Hotlist’ member you will continue to receive these “Man Skills”
updates, (so consider yourself warned).

Today let’s explore what the “martial arts” have to contribute to
your street survival skill-set.

It’s important that you know this because there’s been a kind of
myth floating around out there that “learning how to fight” and
“studying martial arts” are one-in-the-same.

They are not. (Which explains why your dojo-trained
brother-in-law had the snot beat out of him by a 100-pound
crack-head).

So here’s what we’ll look at today:

“True Martial Arts” is really about learning an “art” — a discipline — for its own sake.

It’s kinda like learning to sculpt or paint because you enjoy it as an artistic endeavor – not because you’re interested in ever making a dime out of it. (Kinda like my niece who got her art degree so she could work as a waitress).

Martial Arts “Belt Factories” (as named by the cynics), are what most people are familiar with — and the Hollywood version is different than the reality.

The Hollywood version goes something like this: Some poor sap gets beat-up by an evil bully, so he signs up for karate lessons at a local dojo.

Following a long video montage of slow-motion punching, determined teeth-clenching, extreme sweating, and flying roundhouse kicks, (which, by-the-way, never work in a real fight), he emerges from a Dojo tightening up his black belt. (In reality, he would also be 20-years older).

Soon after he’s kicking ass on the bully who crossed him, (who is also 20-years older and unable to remember what started all this).

Boils down to this: True Martial Arts concentrate on discipline and complicated “fine motor” techniques.

Nothing wrong with that, other than that this kind of training flies straight out the window during the adrenaline dump of a real fight.

Which is why statistics show that your average “storefront” black belt does not have a much better chance at winning a street fight than any other average guy.

Shocked? Don’t be. Many martial arts techniques are simply no longer useful. Breaking pine boards in half, for example, was originally developed to train warriors how to shatter an opponent’s protective wooden chest plate.

I haven’t seen many street tuffs wearing that, (but who knows, it may come back).

And the high flying roundhouse kick was developed to knock a man off his horse, (although this might work for a guy on his Harley).

Point is, if you’re interested in knowing some fast and effective tricks to winning a street fight, without all the fluff, your local dojo may not be the place. (Besides, the coffee in those places is terrible).

Yes, some guys imagine themselves to possess finely-honed fight skills because they watch a lot of MMA. (Another win! Man, I’m good. Any more beer?)

There are indeed MMA schools for “sport fight” training. It’s often tough, fairly realistic and brutal fight training… but it is NOT the same as studying street fighting.

In MMA it’s to “make money as quickly as possible”. In other words, MMA fighters are paid entertainers. (Are you not entertained?)

Statistics show that a typical street fight lasts only 3 to 8 seconds, (about the same time it took you to read this sentence).

If every pay-per-view “cage” fight was over within 3-8 seconds, promoters would lose their audience, their advertisers, and their a**, (also known as the 3-A’s), fast.

And that explains why there are no quick “fight-ending” moves allowed in the ring — which is what a street fight is ALL about. I’ll give you a list of the secret blacklisted moves in a bit. (Okay, so they’re not all that secret).

Another thing: Promoters have got to take some effort to protect the fighters. (Why? They didn’t do that in Rome.)

MMA fights wouldn’t be “sanctioned” for long with a continuous stream of dead bodies being hauled out of the ring. For Pete’s sake, we’re not living in a Mad Maxx movie. (Not at least for 5 more years anyway).

With Moves That Actually Work.

Martial Combat is training for real-world street-fighting. It has one goal in mind – to end the threat as quickly as possible. (That means duking it out with NO coffee breaks).

There are NO rules – and every confrontation could end in serious injury or death.

Here are 16 moves that are outlawed in most sanctioned MMA fights — but used in most street fights:

What wins a “match-fight” is strength, size, speed, endurance, and skill. (And paying-off the ref doesn’t hurt either).

In “personal combat” or street fighting, it’s the use of deception, distraction, disruption and destruction (the four Ds) that wins.

Think about this. When Mike Tyson went to prison – they
separated him from the general prison population for his own
protection.

Why? I mean bad-ass Mike Tyson was the most feared Heavy Weight boxer at the time – what did he have to worry about?

Well, even Tyson knew that the fight rules in prison were different than in the ring. In fact, just like on the streets, there are NO rules.

Anything goes, and you’ve got to be resourceful to survive.

Now granted, some skinny little con would have little chance at beating a professional boxer in the ring under existing boxing rules. But a sport fighter who doesn’t understand the big “Four Ds” is at a serious disadvantage in any street fight.

This is why size, strength, and endurance are not huge factors in a street fight – it’s about your skills in the Four Ds.

More to come. So stay tuned.

One thought on “Man Skills: Real fighting vs fake news”