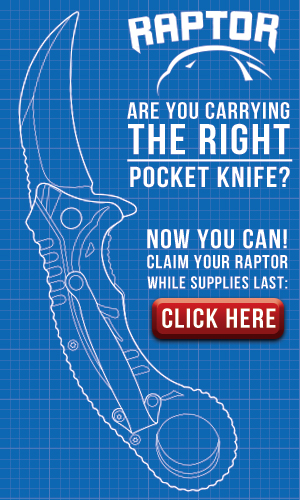 Do you have personal bodyguards?

Welcome to another amazing episode of “Man Skills”. Today let’s talk about exactly who is really responsible for the defense of yourself and your family, (and it may not be who you think).

Even though the car insignia reads “To Serve And Protect”, with all due respect, (I suspect this will cost me a ticket next week), the cops are not your personal bodyguards. They can’t be.

Here are three reasons we have cops.

Deterrence: This is their main purpose. They patrol the streets and convince less-than-stellar citizens that criminal activity is a bad idea — not because it’s wrong, (“you know Vinney, maybe robbing folks is hurtin’ society”), but because they might get caught.

Deterrence depends on people’s reluctance to take a chance. It’s like the store owner (true story) who kept getting robbed and ripped off, so he placed an obvious cardboard cutout of police officer in a highly visible part of his store.

It completely eliminated the robberies and dramatically reduced shoplifting. It worked not because anyone was afraid of a cardboard cutout, (although I saw one of Ozzie Osbourne that scared the be-Jesus out of me), but because it placed a seed of doubt in the mind of the potential criminal.

(Speaking of which, I’m considering placing a cardboard cutout of myself behind my desk with the voice-activated responses: “You bet!”, “Let’s talk about this later”, and “I thought we fired that guy”. Believe me, no one will notice the difference).

Mop up: Okay… this sounds lousy, but much of a cop’s time is spent traveling to crime scenes, talking with victims, writing up reports and “mopping up” the blood.

Now, this has almost nothing to do with preventing crimes, except for the fact that good police work can eventually lead to getting specific criminals off the streets.

Apprehension: Here’s where cops earn their paycheck. It takes guts to put your ass on the line and hunt down and capture a dangerous criminal.

Plus cops operate under a different set of rules. For you, the goal is to end a fight as quickly as possible by any means necessary, (including vicious name-calling and pulling hair), to stop the threat.

Police, on the other hand, must abide by “escalating rules of force”, meaning they can’t just head-butt a dangerous crook, but must “control and contain” the threat… a more difficult task.

Last thought about the police: Most people are shocked to discover that the cops do not have the ability, nor the legal obligation, to protect individuals. (Discovered that when I unsuccessfully tried to have my annoying neighbor permanently quarantined).

The harsh reality is that YOU are responsible for your own protection — and for that of your loved ones – not the cops.

The moral of this story: Learn some simple self-defense skills. It’s pretty easy.

How About A Helping Fist, Friend?

A fight is a serious situation — whether it begins as an argument over a girl between buddies… a robbery that becomes an assault… or a psychopath twice your size who’s hell-bent on hurting and humiliating you for cheap thrills.

There are “conflict management” techniques that can work on the “emotionally highjacked”, (we already talked about him, the man-child with anger management issues), to diffuse the situation…

…but overall, when an actual “fight” is on, you really only have two options:

A lot of people want to believe that there’s a third option: Hunker down and willingly “take a beating”, hoping either that the bad man will show mercy, or that good citizens will jump in to stop the carnage before it gets too ugly.

That is a bad strategy.

First, don’t bet your life on your opponent’s sense of mercy. He may have none and may be more than willing to kill you. So doing nothing to defend yourself may be the last poor decision you ever make.

Second, never depend on other people “breaking up” the conflict. Fact is, bystanders and even your friends are unlikely to step-up and help you.

I’m not just making that up, (although I’ve been known to do that), as there’s solid research to back it all up.

Like the incident where a young man was being beaten-up while his friends laughed, took bets and posted the whole thing on YouTube. (Okay, that was me. Sorry Felix, I was young).

We’d all like to believe our buddies will back us up, but sociological studies show that the greater the number of friends and bystanders are hanging around, the less likely it is that you’ll get help in a fight.

The technical term for this is “dilution of responsibility”, but I think they should change that name to something less technical like: “Don’t really give a s@#!”.

On the other hand, if you have just ONE friend and no crowd of bystanders, your buddy is much more likely to jump in and try to help you out. (“Keep taking those punches… I’ll go get some bandages”).

But the facts have shown over and over that individuals inside a crowd are less likely to act.

A “gang” mentality is different. They will back each other up because it’s part of their “job”. (Don’t forget to punch your time-card Guido).

I’ve been in the self-defense business for over 30 years now, (what have I been doing with my time?), and noticed that there are two extreme ways of thinking.

Some guys consider self-defense difficult and complex, (it’s not, so there’s that)…

…others think that you only need to know “one or two moves”.

Okay, keeping it simple is actually not bad advice, but knowing 1 or 2 techniques is not enough.

Because, after countless interviews with some of the most dangerous fighters on the planet, I discovered that ALL of these fighters were very quick to see open targets, (or to make them open), then utilize any one of an arsenal of specific techniques to attack those open targets.

So you should learn at least 3 techniques for each of the “four ranges” of fighting, including:

a. Long Range: Pick up on 3 good long kicks. FightFast has an arsenal of kicks to choose from – use the ones that fits you best.

b. Medium Range: Choose 3 good punches and short kicks and learn the ear slap, eye jab, and the palm in the face. These simple techniques can (and often do) end the fight in a couple of seconds, but you should never count on it.

c. Close Range – This is where you’ll be able to end it. There are a lot of vicious and devastating techniques to discover in this range, including specialized knees shots, wicked elbow strikes, and fight-ending headbutts.

Experienced fighters typically use special tactics to get into this range, and then use one of these brutal techniques to end it. It’s lights out, game over.

d. Grappling – Despite popular belief, research shows that most fights don’t go to the ground unless you’re in a “contain, control, comply” mode. But it does happen, (especially if the fight goes longer than 12 seconds), so you need to have some ground-n-pound aces up your sleeve.

Okay… let’s back up for a second here. The only time that knowing “2 moves” actually makes sense is when someone is referring to an “opening move” and a “finishing move”.

Not long ago I gathered together eleven of the world’s most respected hand to hand fighters — Special Forces guys, government operatives, and illegal “pit” fighters — to put together a video.

These guys are my business associates and friends, (and for some reason nobody messes with me anymore), who revealed their favorite “no-nonsense” moves they personally use at the start of a real fight, (to gain an instant advantage)…

…and at the end of a real fight, when they want to put their opponent away.

Two moves, a “starter” and a “finisher”… and the fight is over.

If you’re interested in knowing more about this training video, you can check it out HERE.

One thought on “Do you have personal bodyguards?”