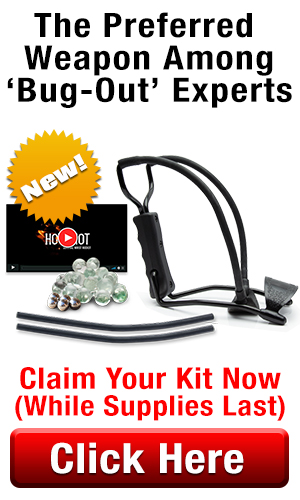 Last week I brought you Part 1 of “How To Deal With Fear” — (since you’ll never win a street fight if you’re frozen solid to the sidewalk).

Anyway, it would be logical for you to think that this edition of Man-Skills would be Part 2 of how to deal with fear…

…but you’d be wrong, (because what does logic have to do with Man-Skills? Nothing I tell you. Nothing!)

I’ll bring you Part 2 of that next week, okay?

But today it’s my chance to squeeze-in yet another teacher in our extensive line-up of FightFast/TRS Survival instructors.

I started doing this primarily out of resentment and seething rage, (is there any other reason for doing something worthwhile?).

You see, some unscrupulous competitors suggested that the credentials of our arsenal of teachers were simply “too good to be true”.

And so I’m presenting them to you one by one, (as kind of a beauty pageant for the most dangerous men on the planet).

For anyone interested in heroic tales of fighting-men, Dale Comstock’s life story reads like a Hollywood action movie, (except that his story is more thrilling… and true).

Over the last 35 years, Dale has served in every campaign from Grenada to the present-day conflicts as a frontline combatant directly engaging the enemy, either as a Paratrooper, Green Beret, Delta Force Operator, or Paramilitary contractor.

Dale’s specialty is as a surgical explosives expert, (he was the bad-ass who explosively breached the Modelo Prison in Panama during the 1989 U.S. invasion to rescue Kurt Muse).

He moved on to be a Special Forces “A-Team” Green Beret… served with the 82nd Airborne as a Long Range Recon Scout… then served ten long bloody years in Delta Force as an Assault Team Leader.

Dale was twice decorated for Valor, and turned down the Silver Star because he was “just doing my job”. Given the Bronze Star anyway, with the “V” for valor.

He then went on to serve for 9 years as a much-feared and respected paramilitary contractor and merc, helping the U.S. and its allies hunt down and eliminate bad guys all over the world.

When it comes to terrorist thugs, let’s just say Dale has been very effective at taking out the trash.

It’s Not About What Berries To Eat.

His 3 decades of surviving in the field and facing down bloody combat have honed Dale Comstock’s survival skills to a razor’s edge.

He’s lived for months in the field under conditions that would kill a billy goat, (those tin cans are especially tough to digest).

Dale knows better than anyone else the ugly truth about what really happens when a country is thrown into chaos, the power is shut down and regular folks like you and me start to run out of food and water, (personally I know I can get darn cranky when I miss a meal).

The good news is that some people band together to help each other, (and sing inspirational songs). The bad news is that most others go the opposite way, (and their songs are a little different. More like Gaelic war chants). The animal instinct takes over and they resort to looting, brutality, and even murder to survive.

According to R. James Woolsley, former director of the CIA, a shocking 90% of urban Americans are likely to die within six months of a massive power grid failure.

This is why Dale, (not a guy who sits around on his tuchus) started speaking out on what it would take to survive in that kind of a desperate world.

Because after witnessing many “meltdowns” around the globe, (places like Kuwait City… Mogadishu… Bagdad… Panama City… Central American… Iraq… Afghanistan just to name a few)…

…Dale knows better than anyone that it won’t just be “bush-craft” skills that’ll save you, (because it’s hard to pick the right berries when people are shooting at you).

Dale points out that you’ll also need to know how to conduct a fighting withdrawal from your home with military efficiency… high-speed tactical driving techniques, (cool stuff, like how to blast through roadblocks and spin out other vehicles)…

…how to prepare your Bug-Out bag with the right kind of gear and supplies to keep you and your family alive and safe in the field, (where there will be no TV or microwave popcorn).

So yes… this is more than just knowing what plants are safe to eat, (or which ones will make you hallucinate). It’s about using your gear and wits in a hostile environment.

If you’re interested, Dale put together a FightFast Gold Level DVD Survival package where it’s all spelled-out for you.

This instructional course is packed with intense and super practical “how-to” survival skills that can absolutely save your life if, heaven forbid, modern society ever does meltdown, (and it’s starting to look like we’re well on our way).

Learning From The Guy Who’s Been There.

Okay… I have known Dale for a lot of years. He’s a FightFast instructor and we’ve worked together on many different self-defense and survival projects.

He also served as an instructor for the Delta’s Operator Training Course teaching self-defense.

When it comes to armed combat, or hand to hand, or just some simple bam-bam he’s out kind of tricks, Dale Comstock is the guy you’ll want to train with.

His combat material is simple “instant domination” training that really fits with the way Americans think. A little boxing, a little grappling, lots of pure street fighting smarts… and the simplest “menu” of end-it-fast moves you’ll ever see.

Best part is that you learn it all FAST, you don’t have to be big and strong… and these moves will work in the real world.

Frankly, Dale has more than lived up to the name “American Bad-ass”.

I’m just glad he’s on our side.