Devastating Oblique Kick To Take Out An Attacker’s Knee

The simplicity of this kick is exactly what makes it so effective. When adrenaline is rushing through your system this is exactly the kind of simple and effective move you will be able to remember and execute in the heat of the moment. This self-defense technique targets the knee, which as you know is a very vulnerable joint. Not only is it anatomically vulnerable, but it is rarely defended by an attacker who is much more worried about a punch to his face. 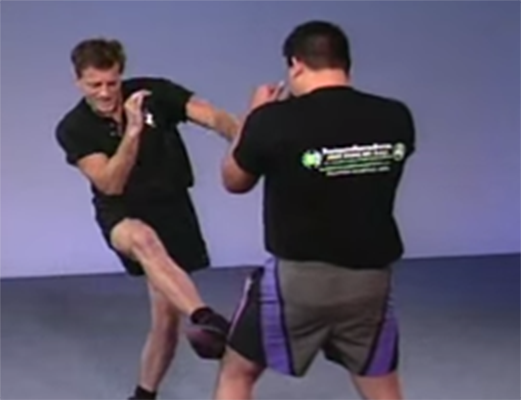 As Paul says in the video, it doesn’t get much simpler than this, and since most common fighting stances put one leg (the lead leg) in front of the other, most attackers will be sending you an open invitation to take out that lead knee.

The key to making this move successful is to strike the knee right when your opponent shows signs of throwing a punch. By making the move quick you will strike him first, taking out his ability to stand and deliver the punch, but keep in mind, this is not a lead-off move. Your attacker must be distracted in order to use this little self-defense trick.

When you are practicing this self-defense technique be sure to have your partner keep his knee bent and aim for his shin. The knee is very sensitive and even at practice speed landing your foot on a locked-out knee can cause a lot of damage.

With that said, go practice this technique. It’s way too easy not to learn and adds one more self-defense technique to your bag of nasty fighting tricks.

Paul is a Jeet Kune Do master who learned under Dan Inosanto (Bruce Lee’s main student and training partner). He is also a master in several other arts and is so well respected in the industry that he was hired by the Navy to teach his hand-to-hand and knife fighting skills to the Navy SEALs, including the elite SEAL Team 6.